More than 36,000 Bronx public school students were homeless during the 2018-2019 school year, accounting for 32 percent of all homeless schoolkids in New York City, according to a new report.

The children resided in shelters, lived with others due to loss of housing, or else lacked a fixed, adequate place to sleep at night, according to data gathered by the New York State Technical and Education Assistance Center for Homeless Students, which issued the report.

The data, which came from the New York State Education Department, showed that public and charter schools identified 114,085, or one in ten, students as homeless.  More than 34,000 students were living in New York City shelters, and more than twice that number (73,750) were living ‘doubled-up’ in temporary housing with relatives, friends, or others, the report states. 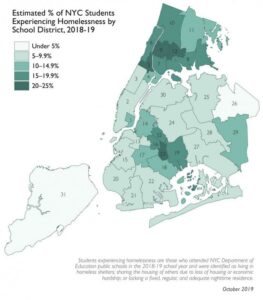 The number of city students identified as homeless has  increased by more than 70 percent over the last decade, despite a half percentage point decrease from the 2017-2018 school year, according to the report.

At least 36,679 public students in the Bronx were counted among the homeless, the data shows.

“This problem is immense,” aid Kim Sweet, Executive Director project of Advocates for Children of New York, which oversaw the homelessness tally. “The number of New York City students who experienced homelessness last year—85% of whom are Black or Hispanic—could fill the Barclays Center six times.”

The report said that nearly half of families entering shelters are placed in a different borough from where their youngest child attends school, and nearly two thirds of students living in shelters are chronically absent, contributing to poor educational outcomes.

“The city must begin turning around educational outcomes for students who are homeless, starting with making sure students get to school every day,” Sweet said.