Bronx District Attorney Darcel Clark told an audience Tuesday her prosecutors have struggled to adopt a policy of seeking lower bail amounts—in part because of the tough-on-crime ethos that pervaded the office under longtime DA Robert Johnson.

“I have tried to change my office,” Clark said. “But, you know, sometimes it’s hard changing a culture. I took over an office where the DA was there for 27 years. I’m new to this, but I’m in the 21st Century, so I get that we can’t keep everybody in.”

Clark made the remarks about her office’s culture in response to a question submitted by an audience member to the forum’s moderator, “60 Minutes” correspondent Scott Pelley.

Pelley said most DA’s offices, including Clark’s, ask for high bail when a charge includes violence. He asked Clark what role bail and pre-trial detention play in the system.

“What I instructed my assistants to do is, as long as bail is available, you have to have a reason to seek the bail,” Clark continued, referring to internal directives she gave her prosecutors. “So my theory now….if I’m not seeking a jail sentence on somebody, we shouldn’t be asking for bail. It took a long time to get the assistants to wrap that around their heads. The newer ones get it. It’s my middle managers that have been there a while, that they’re used to doing it for so long that they can’t get out of it no matter how many times I tell them. So I keep pounding it into them.”

A state bail reform law, slated to take effect in January 2020, will eliminate cash bail for most, but not all, criminal charges.

“Now the law’s changed, they have to do it,” Clark, the first African-American woman elected District Attorney in New York State, said of her assistant district attorneys.

She said she wants her prosecutors to think about whether a defendant can afford a specific bail amount before it is requested, and to seek the “least restrictive” means of ensuring their return to court whenever possible.

“That’s what I’ve been training them to do. That’s what we’re going to continue to do even when the law takes effect.”

Clark’s office has come under fire from Bronx defense attorneys for continuing to seek high bail in many cases, including some non-violent crimes. 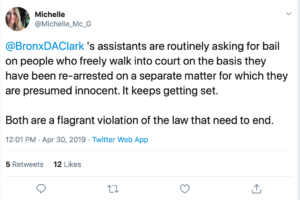 Clark, who is up-for reelection this Fall, appears poised to win easily. The incumbent prosecutor was the only candidate to file a petition with the city’s Board of Elections ahead of a recent filing deadline for the Nov. 5 election.

Her re-election committee distributed a glossy flier to voters in March boasting that Clark had ended  “cash bail for most non-violent offenses” and “extended early discovery policy,” while also establishing a conviction integrity unit and public integrity bureau.