The Bronx District Attorney’s Office will clear from its books all outstanding summonses for so-called “quality of life”crimes – offenses like public urination, littering, drinking out of doors, and fare beating – potentially allowing tens of thousands of Bronxites to avoid criminal records.

“I will be working with the Office of Court Administration to set a date to dismiss all outstanding summonses for low-level offenses that were decriminalized by the Criminal Justice Reform Act in 2016,” Bronx District Attorney Darcel Clark said in a statement to Bronx Justice News. “This will allow people to move on with their lives and not be hindered when seeking jobs, education opportunities or housing.”

The announcement comes after Queens City Council Member Rory Lancman sent a letter to all five city DA’s last week urging them to “dismiss all criminal summonses for offenses that were effectively decriminalized by the Criminal Justice Reform Act of 2016.” 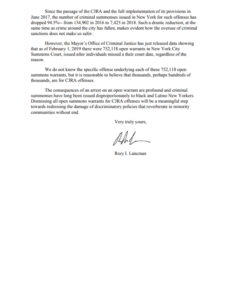 The reform act, which gave NYPD officers discretion to issue civil court summonses rather than criminal summonses for low-level offenses, has led to a 94 percent decrease in criminal summonses issued citywide, from 134,902 in 2016 to 7,425 in 2018, Lancman said. Yet open warrants for failure to appear in summons court have climbed to 752,118 — many of which probably stem from outstanding low-level summons, Lancman said.

The Bronx DA’s office dismissed around 159, 000 outstanding criminal summons warrants in 2017, spokeswoman Patrice O’Shaughnessy said,  and is planning another warrant forgiveness event where Bronxites will be able to clear low-level crimes from their records.

Clark’s announcement was first reported by the Daily News.