More than 50 pounds of fentanyl destined for the Bronx and elsewhere in the Northeast were seized during the 20-month long investigation, which provided authorities with a “bird’s eye view of how the Sinaloa Cartel’s operation and transportation network brings heroin, fentanyl, and death to New York City doorsteps,” Drug Enforcement Administration Special Agent in Charge Ray Donovan said in announcing the indictments.

The Bronx District Attorney’s Office, NYPD, Homeland Security Investigations, and state police were also involved in the investigation, which found that the 22 defendants were part of two different groups that trafficked several kilograms of fentanyl and heroin each month, selling it in bulk to distributors in the Bronx, Philadelphia, Albany, and other cities, prosecutors said. The drugs wound up being sold on the streets in $10 packets.

Seventeen of the 22 have been arrested, with most of the busts coming during a May 28 police operation that yielded drugs, a Mossberg .22-caliber semi-automatic rifle, and 189 rounds of ammunition, prosecutors said. 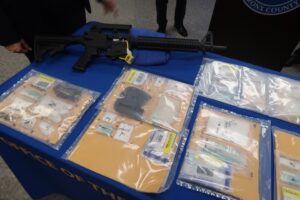 The defendants are charged in two indictments, according to prosecutors. One indictment charges 11 people with 236 counts of various degrees of criminal sale and criminal possession of a controlled substance and conspiracy. Three of the defendants—Roberto Gonzalez Franco, of Los Mochis, Sinaloa, Mexico; Oscar Alessandro Garcia, of Palmerton, Pennsylvania; and an unidentified, “John Doe” defendant from the Bronx—are charged with operating as a major trafficker, which carries a minimum of 15 to 25 years to maximum of life in prison if convicted, prosecutors said.

A second indictment charges 11 defendants with 281 counts of various degrees of criminal sale and criminal possession of controlled substance and conspiracy.

According to prosecutors, Gonzalez Franco is a Mexican national with a B-1 Visa border crossing card restricting his travel to 75 miles from the border. He crossed the border approximately 15 times from September 2018 to early February 2019 and held meetings with other defendants in the Bronx, Philadelphia, and Chicago, authorities said.

According to the first indictment, the 50 pounds of fentanyl was seized from a hidden compartment in a vehicle authorities stopped as it headed from Chicago to the Bronx and other locations, prosecutors said. Authorities said the fentanyl was being supplied by three of the men charged.

The source of the fentanyl is believed to be the Sinaloa cartel, prosecutors said.

The investigation, authorities said, began with a probe of drug dealing in the McKinley Houses, where one of the defendants, Charlie Rodriguez, allegedly headed a group that sold glassines of heroin with the stamp “PAID” and fentanyl with the stamp “PRICELESS.”

According to the second indictment, the other group, headed by Kelvin De Leon and Carlos Miguel De Leon, distributed opioids from the University Heights, Kingsbridge Heights, and Concourse neighborhoods.

Authorities said two of the defendants, Carlos Vazquez and Felipe Marquez, frequented drug treatment programs, and may have used them to cultivate vulnerable people as heroin customers or re-sellers.

Sixteen of the defendants have been arraigned. Most are due back in court June 20.

“We will pursue those at every level of the illegal narcotics trade who put money above human beings,” Clark said.

About Sasha Gonzales 228 Articles
Sasha Gonzales is a Staff Writer for Bronx Justice News covering breaking news and crime. A Bronx native, Sasha is an avid photographer, museum-goer, and reader. She lives in Kingsbridge.