Five months after the de Blasio administration missed a deadline to open a 24-hour cash bail window in the Bronx courthouse, city corrections officials say they expect to have the payment center up and running this summer.

“We want people who are eligible for bail to be back home with their families, in their communities,” DOC spokesperson Peter Thorne told Bronx Justice News. “We are committed to bail reform and to complying with all local laws and will continue to work toward making paying bail as easy as possible. The bail payment window at the Bronx courthouse is expected to be completed this summer.”

A law passed in 2017 required an around-the-clock cash bail option be made available within a half-mile of courthouses in each borough, and corrections officials assured City Council members Rory Lancman and Keith Powers in December the Bronx window would be ready by New Years Day.

But the payment center has never opened, leading the Council’s Oversight and Investigations Unit to issue a report in March finding “that almost two years since the passage of the Bail-Easement Laws, DOC is still failing to provide individuals with a simple, timely way to pay bail and is substantially out of compliance with many provisions of the Bail-Easement Laws.” 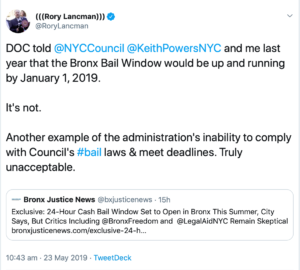 Installation of the window is nearly complete, according to the DOC, which provided a photograph (above) of what it said was the payment center location as of Monday. The site is on the lower level of the courthouse, to the right of the escalators.

Construction is being handled in-house by DOC staff, officials said.

As for why the window has not yet opened for transactions—in compliance with what critics say is a clearly written statute—DOC says it chose to focus first on opening a cash bail window in Queens, since the department had no facility with an around-the-clock, cash bail option in that borough.

DOC said it next began the process of identifying a location for the Bronx bail window, and moved as quickly as it could to construct the space.

Despite the missed January deadline, DOC argues it remains in compliance with the applicable bail law, which states: “The department shall accept or facilitate the acceptance of cash bail payments for inmates in the custody of the department: (i) at any courthouse of the New York City Criminal Court, (ii) at any location within one half mile of any such courthouse during all operating hours of such courthouse and at least two hours subsequent to such courthouse’s closing, or (iii) online.”

The city last year launched an online bail payment system, which accepts credit and debit cards, but not cash. The lack of an around-the-clock cash bail option in the Bronx—as well as Staten Island, which is also waiting on a 24-hour bail window—means the city is still violating city law, critics say.

DOC insists its 24-hour online bail payment option meets the letter—if not the spirit—of the law.

Currently, online bail may be paid while a defendant is still in the courthouse after arraignment, in transit, or housed at a DOC facility.

On court dates following an arraignment, bail must be paid directly at the courthouse’s cashier window.

The City Council’s March report said DOC’s online bail option was “underutilized” and “not widely available” to Bronxites. It also found that “blackout periods still exist” when no cash bail can be paid.

“At this point, to the extent that it’s complying with anything, it’s complying with its own self-imposed and self-granted extensions of the deadline that the law lays out,” Elizabeth Bender, staff attorney with the Decarceration Project at The Legal Aid Society, said of the DOC. “If past is prologue, we have no reason to believe they will comply with this drastically expanded deadline.”

But, Bender says, she hopes DOC has the window “up and running by the summer, for the sake of the people who continue to be arrested.”

About 18,000 people are bailed out every year after being booked into Rikers Island jails, with about 75 percent making bail within one week of being detained, according to DOC data.

Bail reform laws passed in Albany this year are expected to drastically reduce the number of court defendants for whom judge’s can set bail, with most expected to be released immediately after arraignment starting in 2020.

Elena Weissmann, Director of the Bronx Freedom Fund, said the borough’s cash bail window would be “the difference between someone going to jail and not,” since an around-the-clock cash option would allow people to pay cash bail before their loved one reaches Rikers.

The island is nine miles from the Bronx courthouse, and, crucially for those paying bail, not easily accessible by car or public transit.

The 24-hour cash bail window would “radically change” the dynamic for Bronxites who need to secure the release of loved ones, said Weissmann, whose nonprofit posts bail for low-income New Yorkers.

“This is a regulation that shouldn’t have to exist at all,” she said of the law mandating a local cash bail option. “We’re talking about people who are presumed innocent and are incarcerated for their poverty.”

In response to this story, Lancman posted a Tweet Thursday calling the delay in opening the Bronx window “another example of the administration’s inability to comply with Council’s #bail laws & meet deadlines. Truly unacceptable.”