A Bronx-born Navy veteran sentenced to 25 years in a Kuwait prison after his conviction on marijuana-related charges saw his sentence reduced to four years this week by a Kuwaiti appellate court, according to family and friends of the prisoner.

The charges against Nicodemus Acosta, a Computer System Support Specialist with Alaska-based Vista Defense Technologies, were reduced, with the court dismissing marijuana distribution charges against the American. Acosta also faces a $5,000 fine.

Acosta, who is being held in a squalid men’s prison in the Middle Eastern nation, may also be eligible for a rehabilitation program to further reduce his sentence, authorities said.

The U.S. State Department has been involved in Acosta’s case, which gained national attention after Bronx Justice News exclusively revealed his detention.

The veteran had been working in Kuwait for almost four years when the national police arrested him in August on charges of drug use and distribution, after allegedly seizing about 1.75 pounds of marijuana authorities said belonged to him and several associates. 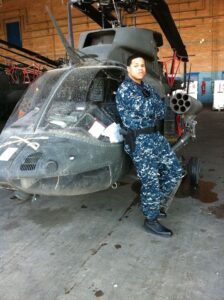 Other Americans were also charged in the drug case and remain imprisoned, police records show.

After several months of court dates, Acosta was convicted at trial in March and sentenced to 25 years with hard labor, according to Sarah Floyd, a friend of Mr. Acosta’s who said she was also taken into custody at the time, but later released.

The ex-service member, who is divorced with a 7-year-old son, joined the Navy in 2008 and served on active duty for 5 years, according to a biography provided by a Navy spokesperson.

During that time, he was stationed overseas in locations including Spain and Bahrain. He continued his military career for several years with the Navy reserves, according to the Navy.

Among the awards and decorations Acosta received during his Navy career, according to the military branch: Enlisted Aviation Warfare Specialist designation; the Navy/Marine Corps Achievement Medal; the Navy Meritorious Unit Commendation; the Good Conduct Medal; the National Defense Service Medal; the Global War on Terrorism Expeditionary Medal; the Global War on Terrorism Service Medal; and the Pistol Marksmanship Ribbon, with sharpshooter designation.
This is a developing story. Check back for updates.
About Kevin Deutsch 265 Articles
Kevin Deutsch is a Staff Writer for Bronx Justice News covering the criminal justice system, drugs, and DNA use by law enforcement. An award-winning journalist, Deutsch is the author of the true crime books "Pill City" and "The Triangle." He has worked on staff at the Daily News, Miami Herald, Newsday, The Palm Beach Post, and The Riverdale Press. His work has also appeared in Newsweek, Columbia Journalism Review, The New York Times, The Village Voice, The Forward, The Independent, Huffington Post, Orlando Sentinel, and the New York Post, among other publications. His numerous television appearances include spots on CNN, MSNBC, and C-SPAN's BookTV. He has also been featured in The New Yorker. A Bronx resident, Deutsch hosts the true crime podcast "A Dark Turn" on the Authors on the Air Global Radio Network.