A biotech entrepreneur is suing for access to Yankee Stadium, claiming she was denied entry to Thursday’s ALCS game because of her “romantic” social media relationship with Yankees slugger Brett Gardner, court records show.

Gina Devasahayam filed documents in Bronx Civil Court Friday claiming the Yankees improperly revoked her ticket and turned her away from the ballpark. She said the Bronx Bombers are “angry with me” for Tweets she posted about Gardner, and for “fraudulently” entering the team’s clubhouse.

“On August 6th, when I visited the Orioles stadium, I sent Brett a birthday card through the clubhouse,” Devasahayam wrote in the filing, referring to the Yankees 9-4 loss in Baltimore. “I asked to go into the clubhouse (players facility) and they permitted me. Later the Yankees security remove[d] me claiming I fraudulently entered the clubhouse. That is not true, I was given a guest pass when I asked for the player.”

Devasahayam said she was issued a “trespass notice” and ejected from the next day’s game.

She said the Yankees also prevented her from attending Thursday’s playoff game against the Astros at Yankee Stadium, revoking her ticket before giving her the boot. 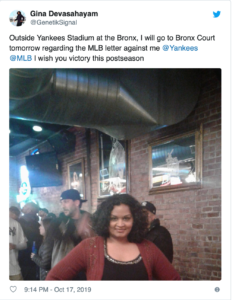 Now, she wants back in the ballpark before season’s end.

Neither Devasahayam nor the Yankees could not immediately be reach for comment.

Devasahayam is a self-described bioentrepreneur with an educational background in biotechnology and biomedical sciences. Her company’s website said she holds a Ph.D. in Biomedical Sciences from SUNY’s School of Public Health and amassed six years of postdoctoral training at the UVA Medical School on signal transduction, pharmacology and drug discovery. 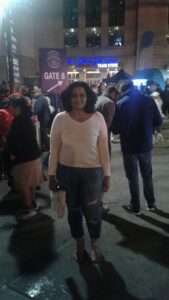 The plaintiff, who claims her Twitter romance with Gardner has been ongoing for four years, is a graduate of the INNoVATE Program of Lifescience Entrepreneurship from Johns Hopkins Carey Business School.

Gardner and Major League Baseball are also named as defendants in her suit.

About Eric Klein 108 Articles
Eric Klein is an editor for Bronx Justice News. Born and bred in the Bronx, he lives on the Grand Concourse, where at least one member of his family has resided every year since the 1930s. Eric has two sons and, like them, is a die-hard New York Yankees fan.