The maps, contained in the report Healthier Homes, Healthier Childhoods: How Medicaid Can Address the Housing Conditions Contributing to Pediatric Asthma, show Hunts Point and Longwood have some of the highest rates of asthma diagnoses among children on Medicaid, as well as higher rates of home maintenance problems, exposure to cockroaches, and health care use related to childhood asthma. 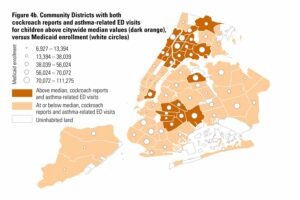 “It has been well-demonstrated that the lack of stable housing can have a powerful impact on health, but the quality of housing also has considerable health effects,” said Misha Sharp, senior research analyst for United Hospital Fund and a co-author of the report.

The maps in the report are based on data in the 2018 NYC Community Health Profiles and the NYC Neighborhood Health Atlas, both produced by the New York City Department of Health and Mental Hygiene.