Coronavirus tests are being heavily rationed across the Bronx, with low-income residents growing increasingly desperate for diagnosis and treatment in the city’s hardest hit borough.

Several South Bronx and Morrisania residents interviewed by Bronx Justice News this week said they had tried, and failed, to schedule coronavirus tests through the state-run COVID-19 hotline. Some were told they weren’t sick enough, while others failed to complete the screening process the state requires all callers submit to before speaking with a health professional.

Still others, fearing state officials would share their personal information with the federal government, declined to complete the screening process because they lack documentation of citizenship.

The bureaucratic hoops are proving especially challenging for families without reliable Internet access or unlimited cell phone plans, as well as the elderly, disabled, and home-bound, these residents said.

“It’s a nightmare,” said one Morrisania woman whose diabetic husband is feverish and unable to leave bed without assistance. “The government is not helping us. Where is the help?”

Currently, there is no COVID-19 testing facility in the South Bronx—America’s most impoverished congressional district per capita, and a community with some of the highest coronavirus death rates in the city.

The dearth of testing comes at a time when New Yorkers are dying in their residences at about ten times the normal rate, city data shows. Causes of death have not been established for many, meaning they are not reflected in the city’s daily COVID-19 death totals.

With officials at all levels of government facing criticism for not allocating enough resources to virus-ravaged communities of color, Gov. Andrew Cuomo on Thursday unveiled a handful of new testing sites aimed at helping low-income, outer-borough residents, including a “walk-in” testing facility the state said would open in the South Bronx next week.

But the location of that site had not been finalized as of Saturday, and its address might be withheld from the public in an effort to ensure only the sickest, pre-screened patients receive tests, officials told Bronx Justice News.

This, as celebrities like the governor’s brother, CNN personality Chris Cuomo, seem to have little trouble accessing COVID-19 tests amid the global crisis.

“We are still in the process of l0cking down final details on a location, which we should have in the next day or so,” Peter Ajemian, Senior Deputy Communications Director for the governor, said of the planned South Bronx site.

Bronxites With Virus Twice As Likely To Die

City Department of Health data shows Bronx residents are dying at nearly twice the rate of other city residents infected with coronavirus.

As of April 2, residents of the borough accounted for one in four coronavirus hospitalizations citywide, an analysis by the nonprofit publication The City showed, and were dying at three times the rate of infected Manhattan residents.

The city’s public hospitals say COVID-19 tests are so scarce, they are only testing patients who require hospitalization. And testing at urgent care clinics, private hospitals, private practitioners, and state-run facilities remain difficult to access for the general public. 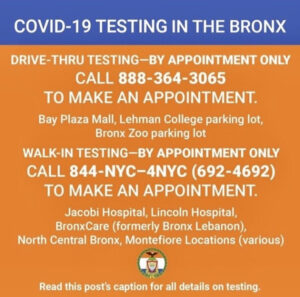 Testing is critical to isolating, treating, and limiting the spread of coronavirus, which, in addition to infecting 21,523 Bronxites and killing 1,308 of them as of Saturday, is taking a devastating economic toll on the city’s poorest borough.

Behind the troubling numbers lay a host of systemic public health issues: The Bronx has the city’s highest rates of poverty, asthma, diabetes, and infant mortality, and includes some of the poorest, most food insecure neighborhoods in America.

The Bronx is also home to the city’s largest minority population, and has historically received fewer government resources than its whiter, wealthier neighbors.

Latino New Yorkers make up 34% of COVID-19 deaths in New York City and 29% of the population, city data shows. African Americans, meanwhile, make up 28% of the deaths and 22% of the population. Nationwide, statistics complied by the Centers for Disease Control and Prevention also show people of color dying from coronavirus at disproportionate rates.

Ritchie Torres, a Bronx City Councilman and COVID-19 survivor, said the lack of essential testing, supplies, and treatment in the Bronx requires immediate help from government—be it at the city, state, or federal level.

“The first borough to receive testing in New York City was not the Bronx, it was Staten Island,” Torres said in an interview with Bronx Justice News, pointing out that, both proportionally and numerically, that borough has recorded fewer fatalities. “There seems to be an inverse relationship. The communities with the most need tend to receive the fewest resources.”

”That disparity is causing preventable deaths.”

Torres said it doesn’t matter where help for the Bronx comes from, but it needs to come soon.

“There is a critical need for testing in the Bronx,” Torres said. “It’s a matter of life and death.”