This Bronx drug store—across the street from the borough’s towering courthouse—is at the heart of the local opioid crisis.

The 161st Street Pharmacy in Melrose received enough pain pills to supply every Bronx resident with multiple doses—part of a wave of powerful painkillers that led to a surge in overdose deaths in the borough, new data shows.

The pharmacy, a block from the Bronx Hall of Justice and four from Borough Hall, received 4,505,100 oxycodone and hydrocodone pills from drug suppliers between 2006 to 2012, according to the data.

The Bronx was home to about 1.4 million people during that period, and saw fatal opioid overdose totals surge in the same span.  By 2017, Bronx authorities had  recorded 363 drug overdose deaths locally—the most in New York City.

The data was made public this week as part of a Drug Enforcement Administration database obtained and published by The Washington Post. The DEA database tracks the path of every single pain pill sold in the United States, by manufacturers and distributors to pharmacies in every American town and city, from 2006 to 2012. 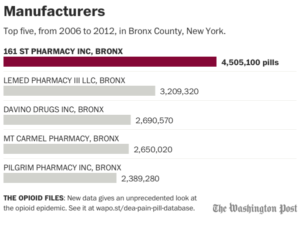 The Post said it sifted through nearly 380 million transactions detailed in the database and analyzed shipments of oxycodone and hydrocodone pills, which account for three-quarters of the total opioid pill shipments to pharmacies.

The data also includes the top corporate distributors and manufacturers of opioids to each county. In the Bronx, 44,885,170 pain pills were distributed by Kinray Inc., and 47,606,938 were manufactured by SpecGx LLC, according to the database.

This is a developing story. Check back for updates.