Money transfer companies are earning millions in surcharge fees from families of New Yorkers held in city jails, their profits boosted by a workaround of a state law meant to limit exorbitant fees, Bronx Justice News has learned.

New York State regulatory code 7016.2 imposes a maximum service fee of $5 on all electronic money transfers made to prisoners’ institutional accounts, including those belonging to the 8,000 or so inmates held in New York City jails each day. But the state Correction Commission passed a variance in June allowing the city Department of Correction to ignore the law—a privilege commissioners have granted the city each year since 2010, state officials said.

The city DOC–New York’s largest municipal jailer–is the only agency in the state that receives such a variance, officials said.

As a result, the two companies that contract with New York City to facilitate money transfers to inmates–Western Union and JPay–earn up to $11.95 in fees per transaction; more than double the amount permitted under state law, records obtained by Bronx Justice News show.

The documents, which include a variance application sent by DOC Commissioner Cythia Brann to state Correction Commission Chairman Allen Riley, show Western Union or JPay took a cut from 123,431 deposits made to inmates during the six-month period ending March 31, 2019.

The total amount sent to city inmates during that period, according to the records: $6,338,270. Over the course of a full year, that amount would generate more than $1.2 million in service fees, even if the legally permitted, $5 per-transaction fee cap were in place.

With the state-granted variance, fee experts said, local revenues for the companies are far higher. 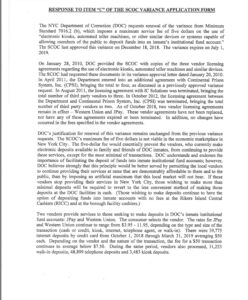 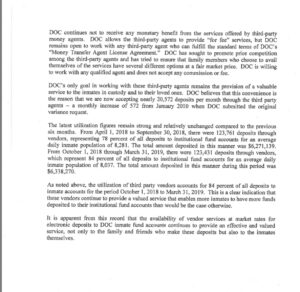 “For far too long, NYC DOC has allowed private companies to exploit our most vulnerable communities,” said Katie Adamides, New York State Director of the Fines and Fees Justice Center, a nonprofit advocacy group. “These companies charge outrageous fees–20% or more of the money put into commissary accounts–from friends and families supporting the basic needs of people who are incarcerated.”
“NYC DOC and its contractors should not be passing costs onto the families and friends of people who are incarcerated,”Adamides added. “New York State should stop granting variances that allow this profiteering, City Council should legislate against allowing these fees altogether, and the Mayor should push for these reforms.”

In its application to the state, DOC argued the variance was needed because the state’s “maximum fee of five dollars is not viable in the economic marketplace in New York City.”

Were the legal limit imposed, the agency said, it would “essentially prevent the vendors, who currently make electronic deposits available to family and friends of DOC inmates, from continuing to provide those services, except for the most minimal of transactions.”

DOC called the current rates “demonstrably affordable to both the companies and the public,” arguing that the local market could not bear “an artificial maximum” on deposit surcharge fees. The agency itself does not make any money on the transactions, its application states.

According to the documents, friends and relatives of DOC inmates made 39,775 internet deposits via credit card between Oct. 1, 2018 and March 31, 2019, with an average deposit amount of $50.

“Depending on the vendor and the nature of the transaction, the fee for a $50 transaction continues to average below $7.50” for credit card deposits made on the Internet, DOC said in its application.

The agency did not provide an average amount for fees charged on those deposits. Nor did the application disclose how much the companies earn in total annually from fees on deposits to city inmates.

In its application, the agency said it still allows visitors to use the “less convenient method” of making cash-only deposits to inmate accounts, free of charge, at the “Rikers Island Central Cashiers” and at “each of the current operating borough facilities’ cashiers.”

JPay, a private company that provides corrections-related services and technology to inmates and their families in more than 35 states, has been criticized in the past for what advocates call exploitative fees.

DOC Press Secretary Jason Kersten said the agency receives “no remuneration” from deposits made to inmates.

“Our goal in working with third-party vendors is to make depositing funds into detainee accounts as convenient as possible,” Kersten said. “We are willing to work with any vendor that can provide the same or a higher standard of service at a cheaper rate.”

This is a developing story. Check back for updates.