Six Bronx neighborhoods lead New York City in 311 heating complaints, with more than 3,200 complaints already lodged in 2019, according to a new report.

The city data, analyzed by Renthop.com, shows the communities of Mount Hope, Fordham South, Norwood, Williamsbridge-Olinville, Bedford Park-Fordham North, and Pelham Parkway tallied the most 311 complaints about heating problems at residential buildings, in that order. 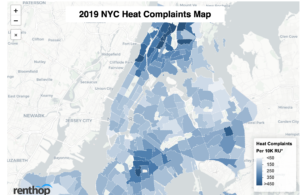 Mount Hope replaced Erasmus, in Brooklyn, as the most poorly heated neighborhood in New York City this year. From October through the end of November, the neighborhood amassed 751 unique heat complaints to 311, which translates to more than 468 complaints per 10,000 renter-occupied units, according to the report.

The Bronx, historically, has been the most neglected borough when it comes to heating issues, followed by Brooklyn, the data shows. So far this winter, the Bronx has received 72 percent more heating complaints than Brooklyn.

Of the 50 most frequently reported addresses, 44 percent are in the Bronx, 28 percent in Brooklyn, 16 percent in Manhattan, and six percent  in Queens.

About Kevin Deutsch 258 Articles
Kevin Deutsch is a Staff Writer for Bronx Justice News covering the criminal justice system, drugs, and DNA use by law enforcement. An award-winning journalist, Deutsch is the author of the true crime books "Pill City" and "The Triangle." He has worked on staff at the Daily News, Miami Herald, Newsday, The Palm Beach Post, and The Riverdale Press. His work has also appeared in Newsweek, Columbia Journalism Review, The New York Times, The Village Voice, The Forward, The Independent, Huffington Post, Orlando Sentinel, and the New York Post, among other publications. His numerous television appearances include spots on CNN, MSNBC, and C-SPAN's BookTV. He has also been featured in The New Yorker. A Bronx resident, Deutsch hosts the true crime podcast "A Dark Turn" on the Authors on the Air Global Radio Network.