The Bronx recorded 889 new cases of COVID-19 Tuesday, bringing its confirmed infection total to 7,814 as the number of fatalities in the borough rose to 262, city records show.

The highest concentration of positive cases in the Bronx appeared to be recorded in the neighborhoods of Highbridge, Morrisania, Fordham, Bronx Park, Pelham, and Throgs Neck, according to the data.

The borough also has the city’s highest number of deaths per capita, the data shows.

Citywide, there were 41,771 confirmed coronavirus cases and 1,096 deaths attributed to the contagion as of 4:30 p.m. Tuesday, the records show. 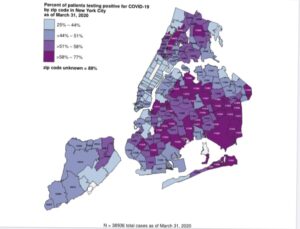