The Highbridge and Morrisania sections of the Bronx appear to account for the borough’s largest concentration of confirmed coronavirus infections—a wave of illness ravaging communities already struggling with high rates of poverty and HIV.

Neighborhood-by-neighborhood data released by the city’s health department for the first time Friday shows much of the Central and East Bronx coping with large numbers of infected COVID-19 patients. The Highbridge and Morrisania communities have the highest percentage of infections among locally tested patients, according to city data current as of March 26.

Highbridge and Morrisania are densely populated areas where rates of poverty, HIV infections, and diabetes are higher than other parts of the borough and city, data shows. 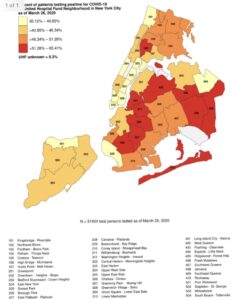 As of 8 a.m. Friday, 4,655 confirmed coronavirus cases had been recorded in the Bronx, according to the city.

Across all five boroughs, at least 366 people have died from the virus, officials said.