An NYPD detective died of COVID-19 in the Bronx Saturday, becoming the first service member to perish from the virus, authorities said.

Cedric Dixon, 48, who worked in the 32nd Precinct in Harlem, died at North Central Bronx Hospital.

A 23-year veteran of the force, Dixon is the third NYPD employee to die from the virus. An NYPD administrative aide in the Bronx is also among the fatalities. 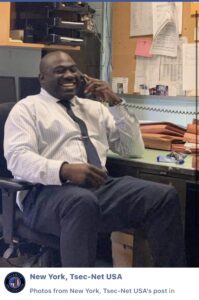 “We have lost three members of our family in a little over 48 hours,” Police Commissioner Dermot Shea said Saturday. “As I stand here I cannot begin to describe what we are feeling, what the families of these three heroes are feeling.”

“For first responders, you just don’t often have the opportunity to isolate,” she said. “You go to the danger.”

More than 500 NYPD members have already been infected by the virus, authorities said.