A 40-year-old man was fatally shot in his head in Wakefield Thursday morning, authorities said.

The homicide victim, Caron Sessoms, suffered a fatal bullet wound about 11 a.m. as he crossed the intersection of White Plains Road and East 225th Street, according to the NYPD.

Paramedics rushed him to a nearby hospital, where doctors pronounced him dead.

No arrests had been announced as of Thursday night. Authorities released this photo of a man wanted for questioning in the shooting. 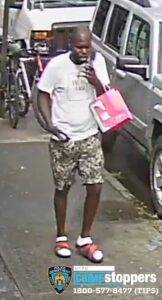 Anyone with information is asked to call NYPD Crime Stoppers at 800-577-TIPS.

About Eric Klein 107 Articles
Eric Klein is an editor for Bronx Justice News. Born and bred in the Bronx, he lives on the Grand Concourse, where at least one member of his family has resided every year since the 1930s. Eric has two sons and, like them, is a die-hard New York Yankees fan.